Francesca made her way towards the ancient, art-deco looking building in Monument, right next to her old local stomping ground, the quiet garden in St.Dunstan in the East. She hadn’t been anticipating another job for a few months, considering the traumatic and almost fatal mission she had been a part of months before. Why had the boss called her in? Didn’t he know that she was still trying to recover? She decided to attend the meeting anyway, just to see what they wanted.

She climbed the winding staircase up to the isolated, almost-gothic looking office and wondered again for the 184th time why they hadn’t yet installed an elevator – it was 2019 after all? Opening the door to the office, a wave of familiarity overwhelmed her senses: the dusty bookshelf in the corner containing books at least 80-100 years old smelling of dust, old ink and even older tales of yore; the cherry red crushed velvet curtains that wouldn’t look out of place in a sex dungeon, and the slow and monotonous ticking of the metronome, which took pride of place on Stewart’s mahogany desk.

“Welcome back Franny.” Stewart grunted heartily, the ghosts of 30 cigarettes a day haunting his throat. He stood at the window, looking down at the hustle and bustle of London Bridge. “I know you said you were taking a break, but we really need you for this one kid: it has to be you.” With an exasperated sigh, Stewart sat down in the chair and looked up at Francesca, a faint smile tracing his lips.

Francesca walked around the room once, looking at the faded paintings which featured the founding spies that came before her: Agnes Reynolds, Millicent Applebaum and Scarlett Keeber. The three women had co-founded The Academy: a top-secret espionage service in which Francesca was a member, and a very good one at that. She finally took a seat opposite Stewart, her bum barely fitting on the hard leather interior. 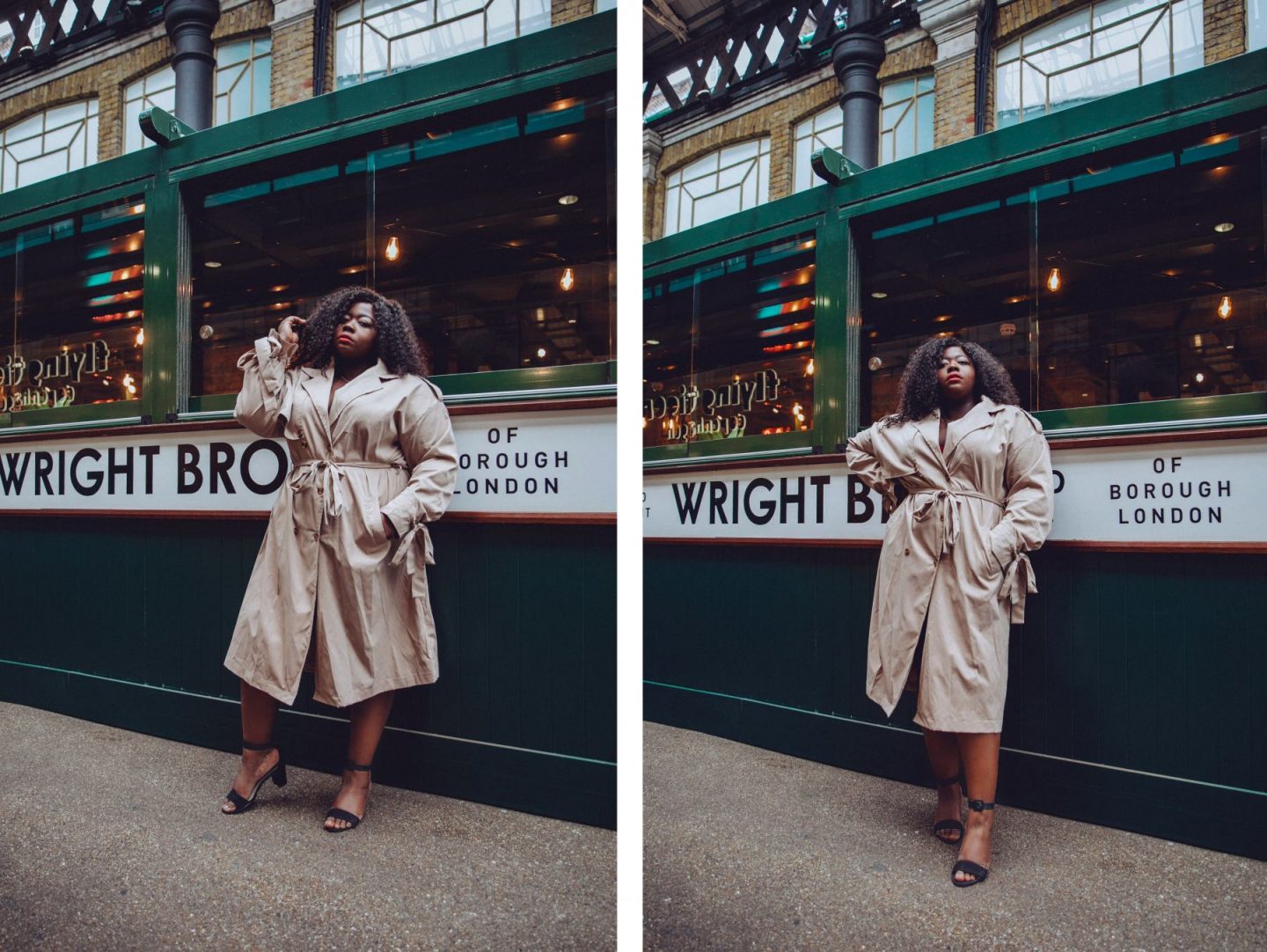 “Stu, how many years have I told you about getting bigger chairs? Or chairs that at LEAST come in size fat?”. “I’ll look into that” Stewart replied, a rare grin forming along his mouth, “but let’s talk about this mission. His name is Jason, he’s 39 years old and American.” Stewart slid an A4 Manila envelope to Francesca gingerly. “We’ve convinced he’s a member of the KGB and may be working as a double agent. We need to find out exactly what he’s up to and well…you were the one that came to mind.”

“We thought it’ll be an easy one, seeing as his house is located directly opposite the huge fire hydrant on Maynard Street and anyway, I thought you’d like this one – he seems your type!” 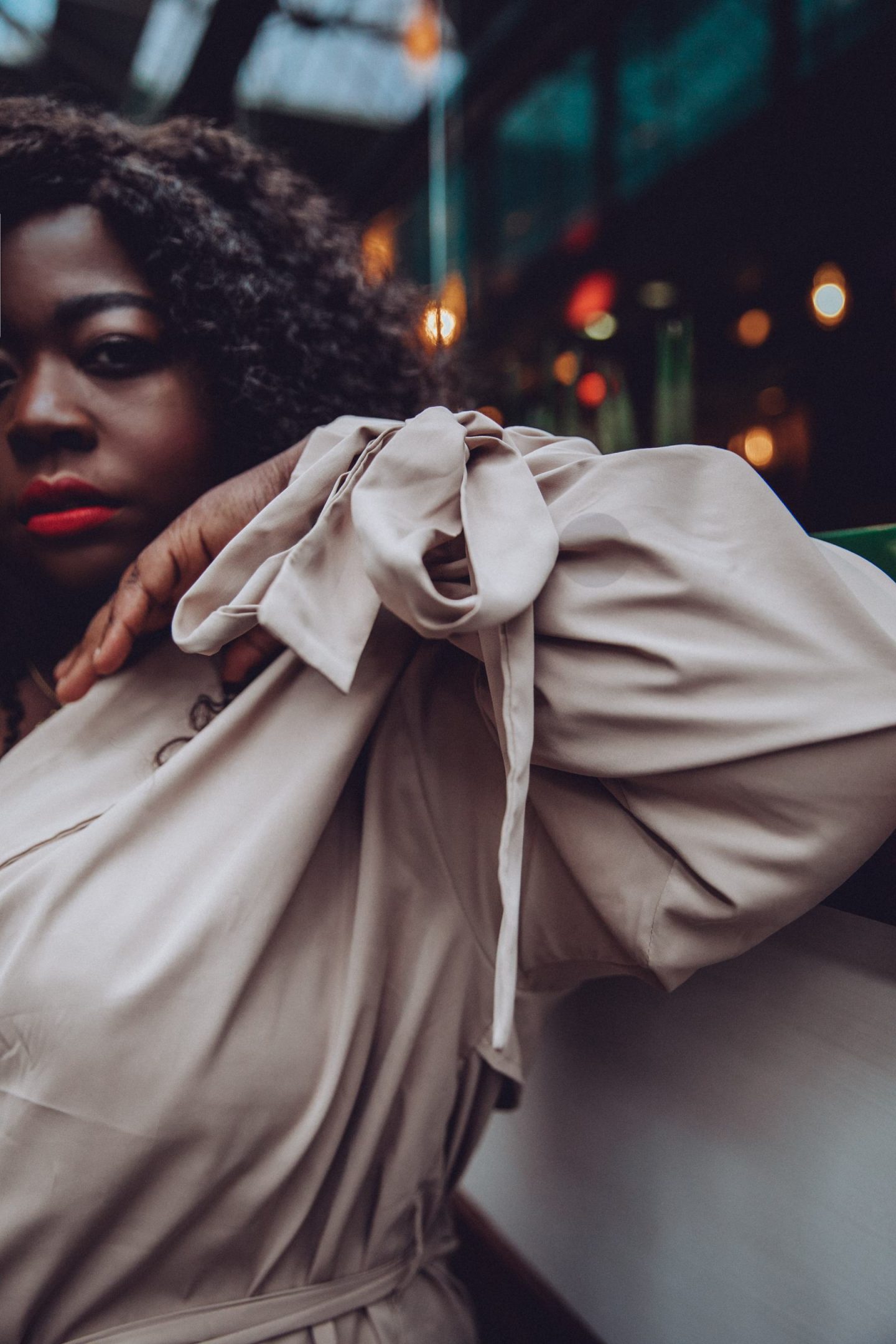 Francesca gazed at the photos of Jason Manderson for a while longer, already thinking about the possible ways to get this agent to talk. Francesca had been the MVP at espionage for the last 8 years, she knew how to make men talk. She knew that the power lay in their vulnerabilities and she went all out to expose them.

“So what is it this time then Stu? Should I follow him on his social media? “Accidentally” bump into him at Madisons? Join his alleged ‘book club’ which I’m sure is a cover for something a bit more insidious?”

“Actually” replied Stewart, looking out of the window “we’ve been able to find out that he has a bit of a thing – a kink if you will – for women in Trench coats funnily enough. I guess it’s the whole notion of curiosity – is she wearing something underneath? Is she not? He seems to like it. To be honest I don’t really understand it and the other things your generation is into. Anyhoo, we know he has a dinner meeting at Liverpool Street station this evening at 7:30 so if you could be stationed there for 7 and find a way to ‘accidentally bump into him, that would be amazing”.

A fetish for trench coats. Interesting. Francesca had heard and seen it all in her line of work: she’d worn gimp masks, had men idolise her feet in return for information and had pegged the odd bloke or two, but this trench coat thing was a new one for her. She’d have to go shopping for one this afternoon. Under normal circumstances she wouldn’t have accepted the job but there was something about this Jason that captivated her beyond belief: the cheeky glint in his eye perhaps? Or perhaps the epic beard? Either way she knew she was going to try and extract as much information from him as possible – by any means necessary.

Francesca stood up, bid Stewart farewell and made the journey back to her apartment, all while reading the case file. Jason had been a very naughty boy and tonight, Francesca was about to find out how naughty he was about to be…

Luckily enough, Francesca already had an arsenal of trench coats for missions like these. For this occasion, she decided to go for her Runway Beige Trenchcoat, a glorious creation by one of her favourite style influencers Lorna Luxe, who created the coat as well as some other beautiful pieces for fashion website In the Style. 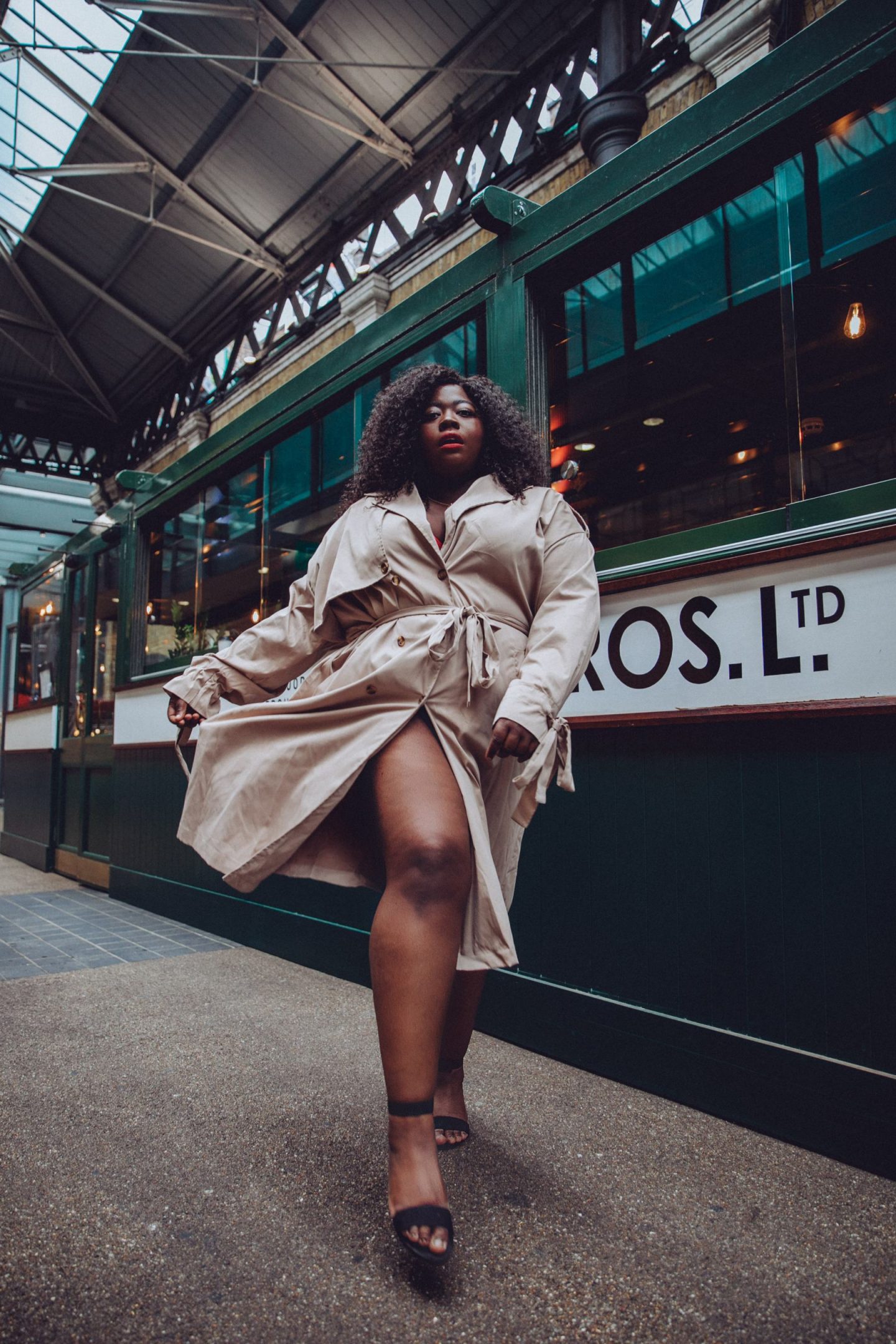 Being a size 26 on top, Francesca was wary of the size 24 fit at first as she needed a trenchcoat she could whip on and off at a moments’ notice, and for that, the coat would have needed to be a touch baggy in some parts. Thankfully however, the coat arrived quite oversized, with a slight flared, a-line shape that beautifully hugged her top half, while equally giving her sexy, super curvy silhouette. The trench coat featured tie cuffs and horn button detail that added a glamourous, Parisian chic touch to the piece. She decided to wear the trench with a postbox-red mesh Curvy Kate bra, black heels…and nothing else. In her bag, Francesca placed her iPhone, a tracking device, a concealed microphone, her favourite Charlotte Tilbury lipstick and some condoms. “Just in case the mission goes well” , she chuckled to herself.

A spritz of perfume and a dash of makeup later, she made her way to Liverpool Street station. Once there, she watched, and waited for her prey.

30 minutes passed before she found her man. Standing outside the Lush Cosmetics store, Jason Manderson stood tall, silent and somewhat quite imposing. He was wearing a beige, slim fitting T-shirt which showed the true extent of his muscular physique. He wore a pair of intentionally-tattered Levi 501 jeans alongside low-top white vans. “Daaaaaamn Jason” thought Francesca, smiling to herself. She sauntered over towards the White Brothers restaurant and took her position, idley staring at her phone as if waiting for someone.

She looked up. Jason was staring right at her. Fran stared back at him, the heat from her beginning to rise, making the top of her lip sweat. She kept her composure and jutted her hips forward on one side, creating an illuminating silhouette.

Jason licked his lips and walked over to her slowly.

“Showtime”, Francesca said to herself. 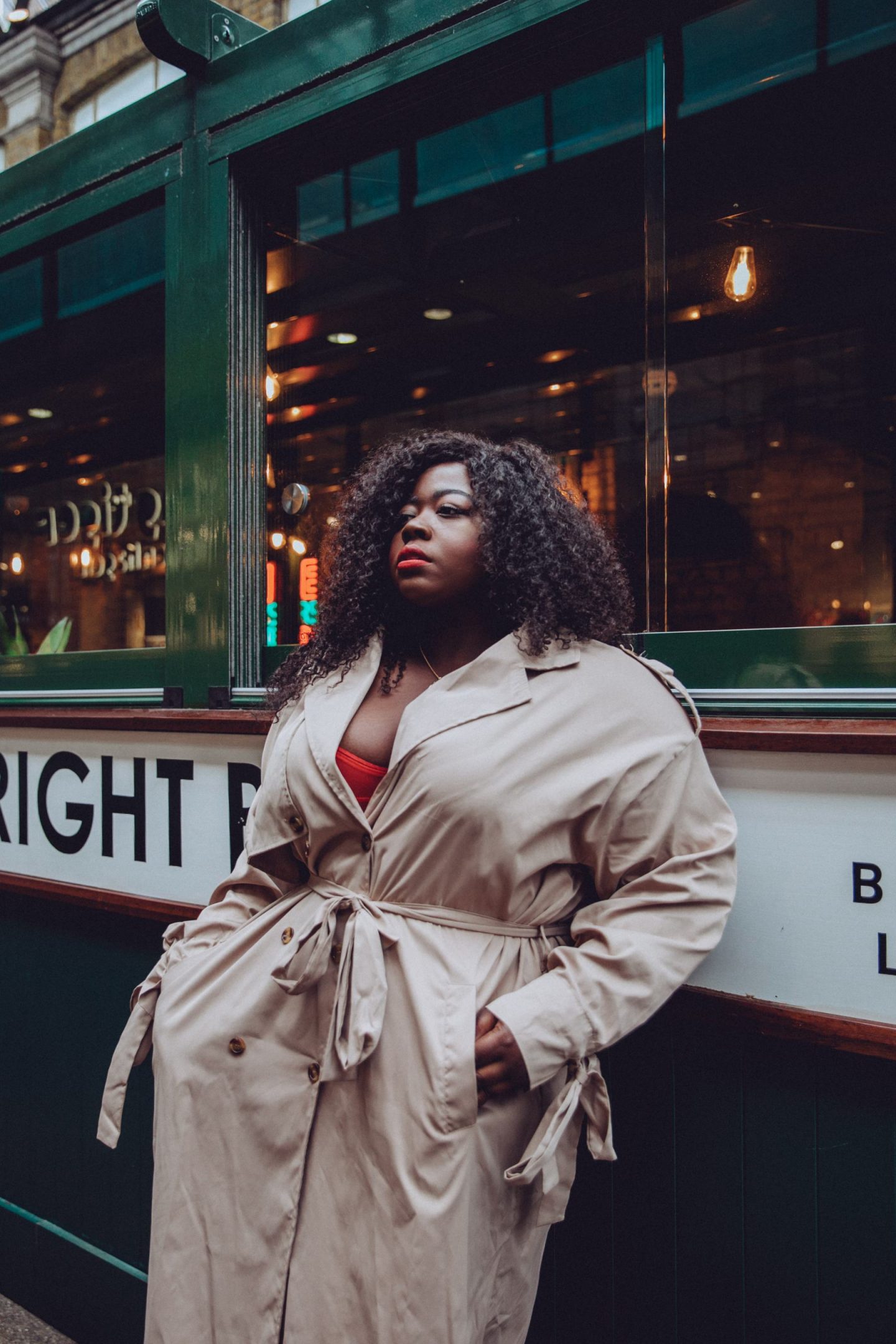 Celebrating #everyBODY with Elvi