A Tale of Two Balm Stains. 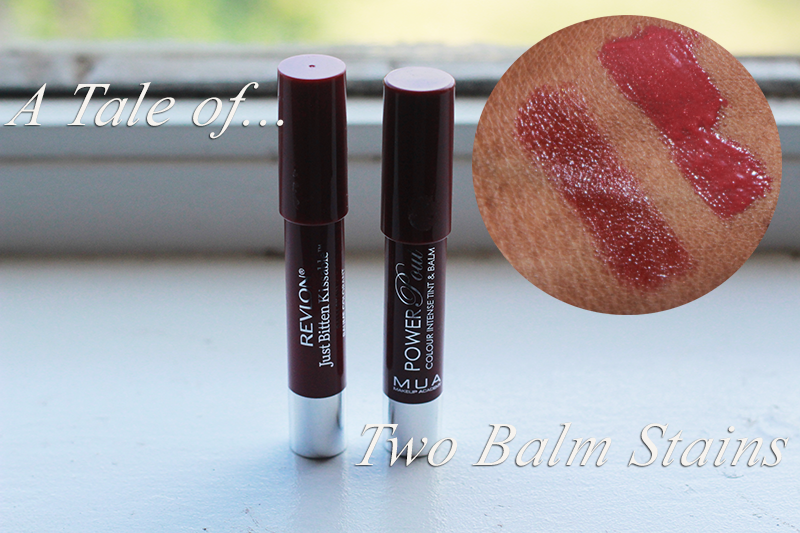 I’ve been rather slow on the lip stain/balm phenomena; I tried to stay away as I assumed that they all looked and felt exactly the same I mean, just look at the packaging above?

In the red corner we have:
Revlon Just Bitten Kissable Lip Stain in ‘Crush’

and in the blue corner we have:
MUA Power Pout balm in ‘Crazy in Love’ 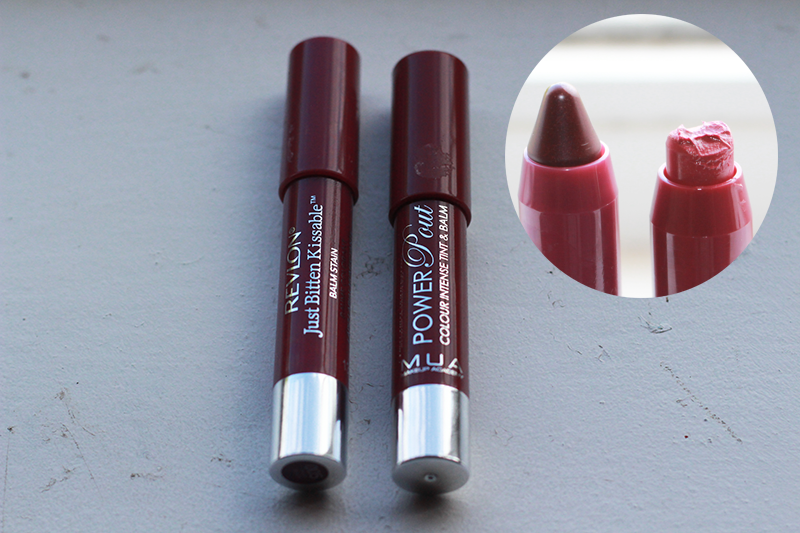 Packaging
I think it’s pretty well known now within the beauty community how common it is for companies to repackage wholsesale bulk items and stick their names on it. Case in point above. Aside from the obvious sizing issues, the design is more or less the same with the exception of the Revlon stick having the sticker on the bottom with the colour code and name.
Texture
As you can see from the photo above, the MUA balm stick is exceptionally creamy; to the point where it actually melted while I was taking the photo *sad face*. MUA feels less like a balm and more like a liquid lipstick. It is pleasantly moisturizing and would suit those who suffer from dry lips.
Revlon on the other hand stands by its’ balm stain claim. Although not as glossy as MUA’s, it leaves a nice stain when worn for over 3 hours. It too is also very moisturizing and has a long wearability rate.
Pigmentation
Both colours are described as a ‘deep berry’, with minor differences. MUA is a deep berry with a light golden sheen, whereas  Revlon looks more blue-based to me, although I could be wrong! With Revlon, the pigmentation really depends on how many times you apply the product. If you apply it 2-3 times than you’re laughing all day, compared to MUA which lasts around a couple of hours before I need to reapply.
Both sticks have a peppermint scent that’s not too overpowering, however overall I wouldn’t really class MUA as a “balm”, as it’s extremely glossy.

I think i’m going to give this round to Revlon!
What do you guys think?

Calvin Klein CK One Shock for Her Perfume Review