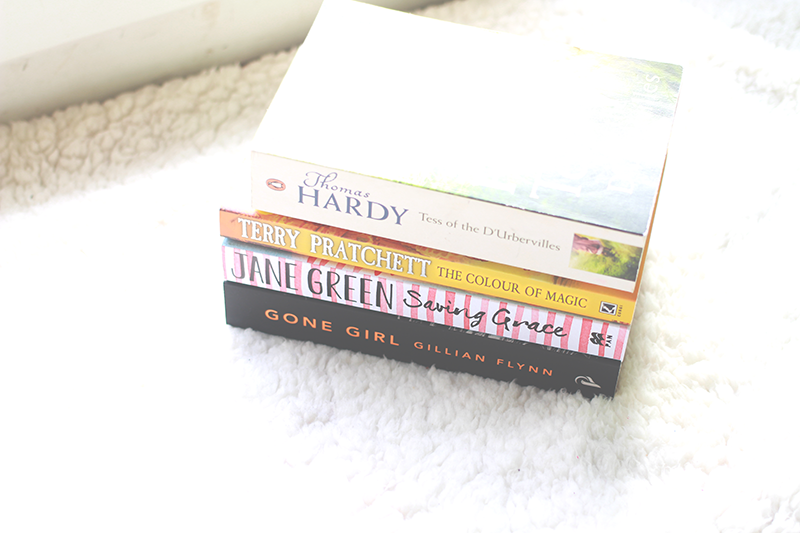 As a massive book lover, I’ve somewhat been ashamed of myself of late as I haven’t been buying or reading, as many books as I would normally do. It’s had nothing to do with the lack of time; it does take me around 1.45 hours to get to and from work each day so that would normally allocate me loads of time to get lost within a book but lately i’ve found myself ether listening to music or talking on the phone. In an effort to fall back in love with reading again, I found myself perusing the aisles at Tesco (as you do) to see if there were any worthwhile books to read among the rows and rows of 50 shades’ influenced books (no shade, but ugh, also no pun).
I picked up these four books which sounded vaguely interesting; let’s see what they are about, shall we? 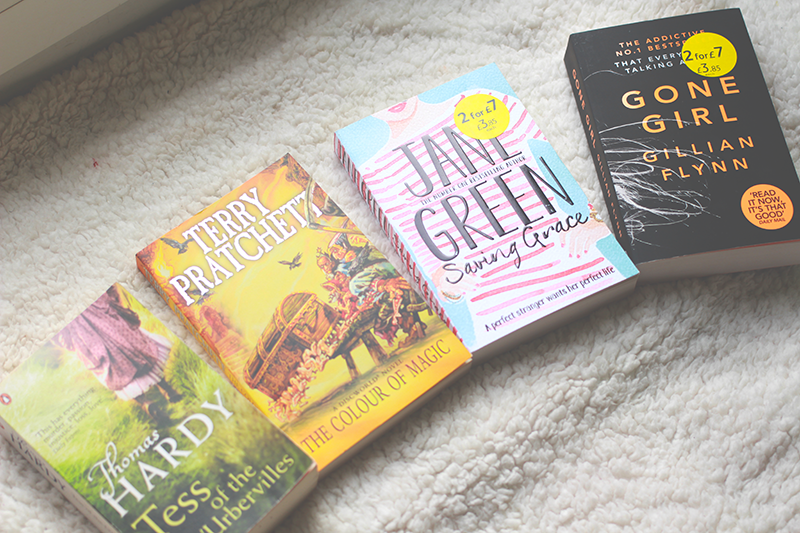 1. Tess of the D’Urbervilles (Thomas Hardy)- I don’t know why I was so shocked to see this book in Tesco as they don’t normally stock the classics, but this book has been on my reading list for the LONGEST time. The story is based in rural England during the Long Depression. Tess, the daughter of two peasants is sent to the house of a Noble family in order to make her fortune. It’s quite a complicated story so I’m really going to take my time with this one!
2) The Colour of Magic (Terry Prachett) –  My uncle is the BIGGEST fan of Terry Prachett so I thought it was only right to see what all the fuss is about. The Colour of Magic is the first book within the Discworld series I believe, and sounds absolutely bonkers. It’s about an expedition undertaken by a tourist, a wizard and some random dragons? This should be interesting.
3) Saving Grace (Jane Green) – Saving Grace is about a couple who are going through a lot of stress within their marriage. Grace hires an assistant to help with things around the house, but this “assistant” is not all she makes out to be. Oooh. Can’t wait to start this one!
4) Gone Girl (Gillian Flynn) – And now we come to the most popular of the bunch. I’ve received such mixed reviews over this book/movie and so I thought I would read the book first before watching. I’m halfway through and I can’t put the book down – it’s great! Gone Girl is a dual first person narrative that centers on a New York couple named Nick and Amy, who are having troubles in their marriage. When Amy suddenly disappears one day – Nick is assumed to be the one responsible, however…it’s not all what is seems…OR IS IT? I need to hurry up and finish this novel.
So these are the books that I am hoping to steamroll my way through this month! What are you guys reading at the moment?

The Gift of Giving with Oxfam