Dating When Plus Sized & Dark Skinned

Today I bring you a little essay/rant/thinkpiece about one of my faaavourite subjects (eurgh…):

Dating when you’re not only plus sized, but also dark skinned. Disclaimer: everything you will read below is from my own personal experiences and the experiences of other plus-sized black women. It does not mean to say that others’ experiences of dating are invalidated, or less important because they aren’t plus sized however. This is just my personal account of the fuckery I’ve observed over the past year or so. 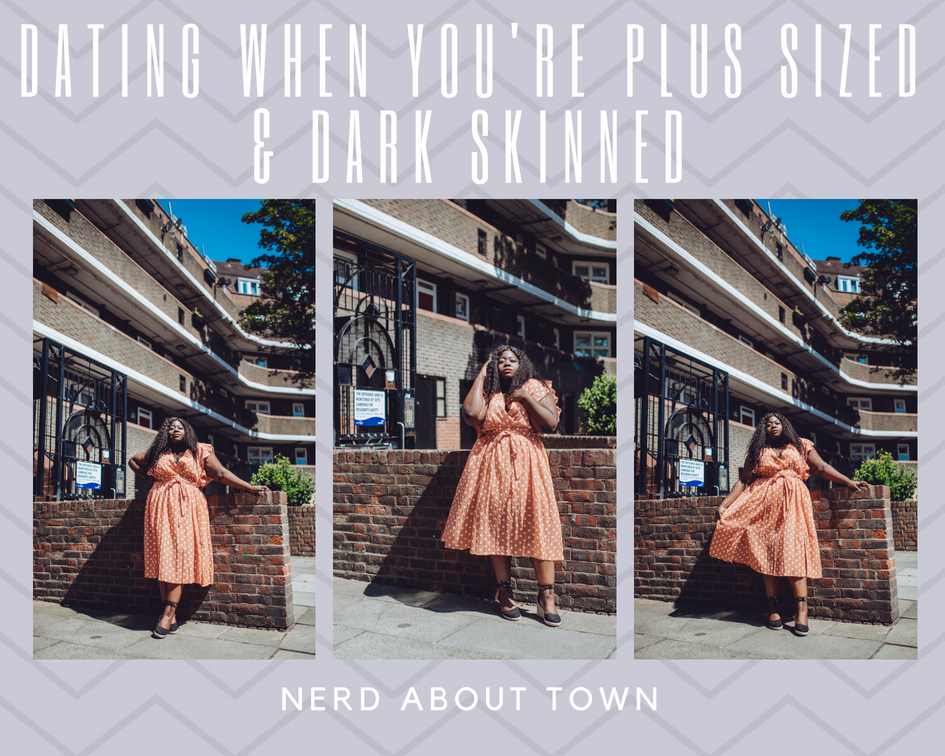 Where to begin? It’s shit, basically.

I’ve written about the portrayal and the experiences of navigating society as a fat, black woman various times on this here blog (you can read them here and here for a refresher), however I’ve often stayed away from discussing the aspects when it comes to dating, as with most things, I like to give it the benefit of the doubt before I start cancelling them. I’ve noticed that I have been chatting about it a lot on social media, and I’ve been inundated with requests to talk about it a bit more in depth, so here ya go!

Let’s call a spade a spade: darker skinned black fat women are bottom of the barrel. We virtually have no privileges when it comes to aesthetics. Yes, black women have it bad, and fat women of all races have it bad, but it’s something about being fat, black AND dark skinned that takes the biscuit when it comes to social conditioning.

Let’s take it back…

It’s been like this since the Jim Crow era, when fat black women were resigned to playing the ‘mammy’ roles and caretakers of the more attractive women. Hell, we can even date it back to slavery and the pre-1700s. Black people as a whole were considered animals; primal, ape-like. Our difference in body shapes rendered us inferior to white people. We were hyper-sexualised and kept in cages, to be gawped at and prodded by white visitors.  When Europeans first traveled to Africa in the seventeenth century, they were shocked that African dress exposed so much skin, even though it was due to the hot climate there.  As a result, African women were seen as lewd and sexually insatiable.

Let’s take Sarah Baartman for example. Sarah was a South African woman from the Khoikhoi tribe, who – due to her large bum and elongated labia – was exhibited as a freak show attraction in 19th Century Europe under the name ‘Hottentot Venus‘. 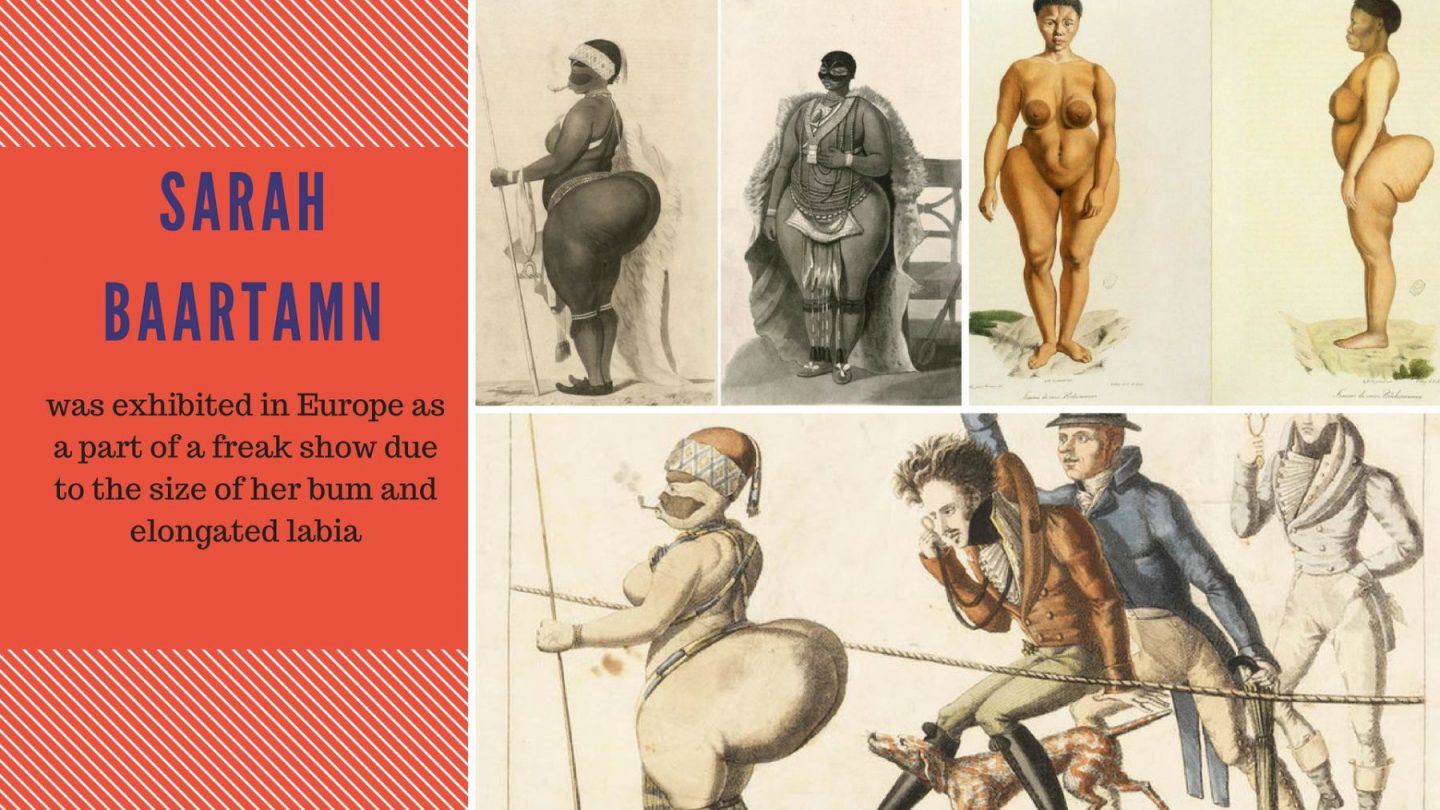 Sarah was paraded throughout freakshows in Europe for years, being the subject of extreme cruelty and objectification by white men and women…all because she had a big bum. Sarah may not have been ‘plus sized’ by today’s standards, but it goes to show that even back then, black women who had carried their weight around a certain part of their bodies became the subject of ridicule and fetishisation (which we will get to in a minute). Sarah eventually passed away aged 26 from possible smallpox, and even in death, her body was still sexualised and degraded.

Her labia was cut away from the rest of her body and displayed in museums across Europe. She was embalmed and her body put on display for years, until 2012 when she was sent back to South Africa, her hometown, and granted an appropriate funeral.

This type of fetishisation of black bodies would continue to the present day.

I’ve been on dating apps and sites for about a year now and I haven’t been on one date. Not one. Why? Well for one, people hardly ‘like’ or ‘match’ with me, and when they do, they are always (and I mean ALWAYS) white men who have a fetish for dominating, fat black women. Do you know how tiresome, dehumanising and disgusting this is?

Now, I hate to have to do this but I am not including mixed race/lighter skinned women in this, because while I imagine it may still be hard, being light skinned is still a privilege and an aesthetic that is deemed as beautiful in our society. This is something that I will touch on in the next part also. But back to being fetishised:

Fetishisation is a fully fledged, well rounded human and limiting them to one aspect of their being that they don’t even have control over. I am being fetishised for being black and plus size. I’m not being noticed for being a multifaceted, intelligent, funny and kind woman. I am stereotyped as an extra curvy, sexually aggressive black woman, and am supposed to be forever grateful that white men even find me remotely beautiful. This stereotype does not exist in real life.

Not being the subject of attraction…by anyone

The above is a generalising statement as I have heard of some plus sized, darker skinned black women in genuine loving relationships, albeit very very rarely. What’s a fat to do when on one hand, you are fetishised by white men, yet hated by black men. There has been an age old argument within body positivity about black women not needing body positivity as much as white women because our bodies are seen as more attractive.

This my friends, is a lie. While it may ring true when you go back to some Afro-Carribbean countires, we live in the United Kingdom of Great Britain and Northern Ireland, and the standards of beauty surrounding what a particular demographic finds attractive is vasty different over here. I have never dated, or gone out with, or have been chatted up by, a black man. At first, I thought it was something to do with me, but however after talking about it online, I realised that it’s something that a lot of other plus sized darker skinned women experience too. To them, we are too big, and not seen as attractive. Dating apps? Rubbish. Meeting in real life? You’re either invisible, or you’re the wing woman.

I’ve had to resort to downloading incredibly suspect and creepy fat fetish apps in order to be among people who kind my body type somewhat attractive, and it makes me feel sick. Obviously, I will never meet anyone from these kinds of apps because I am not into fat fetishes and feederism, but I always have the thought of ‘maybe there will be one person on here I find attractive who *isn’t* into all of this disgusting stuff*. Alas no. It’s still full of incredibly racist, crass messages about my physique.

A few years ago, Tess Holliday came under fire for mentioning in an interview something along the lines the following:

“I do admit that black men love me. I always forget that, and then I come to a black neighbourhood and I remember.”

Now while I didn’t find that quote personally offensive, it did actually highlight a critial point, and a point that most black women have known for years and have just refused to admit. When it comes to being plus sized, I find that black men do prefer fat white women instead of fat black women. Tess was right. Whether it’s because black men want to align themselves with whiteness in a bid to improve their lives, or whether they think that black plus size women are bottom of the barrel, who knows? But this is something I have definitely noticed over the past 10 years or so. 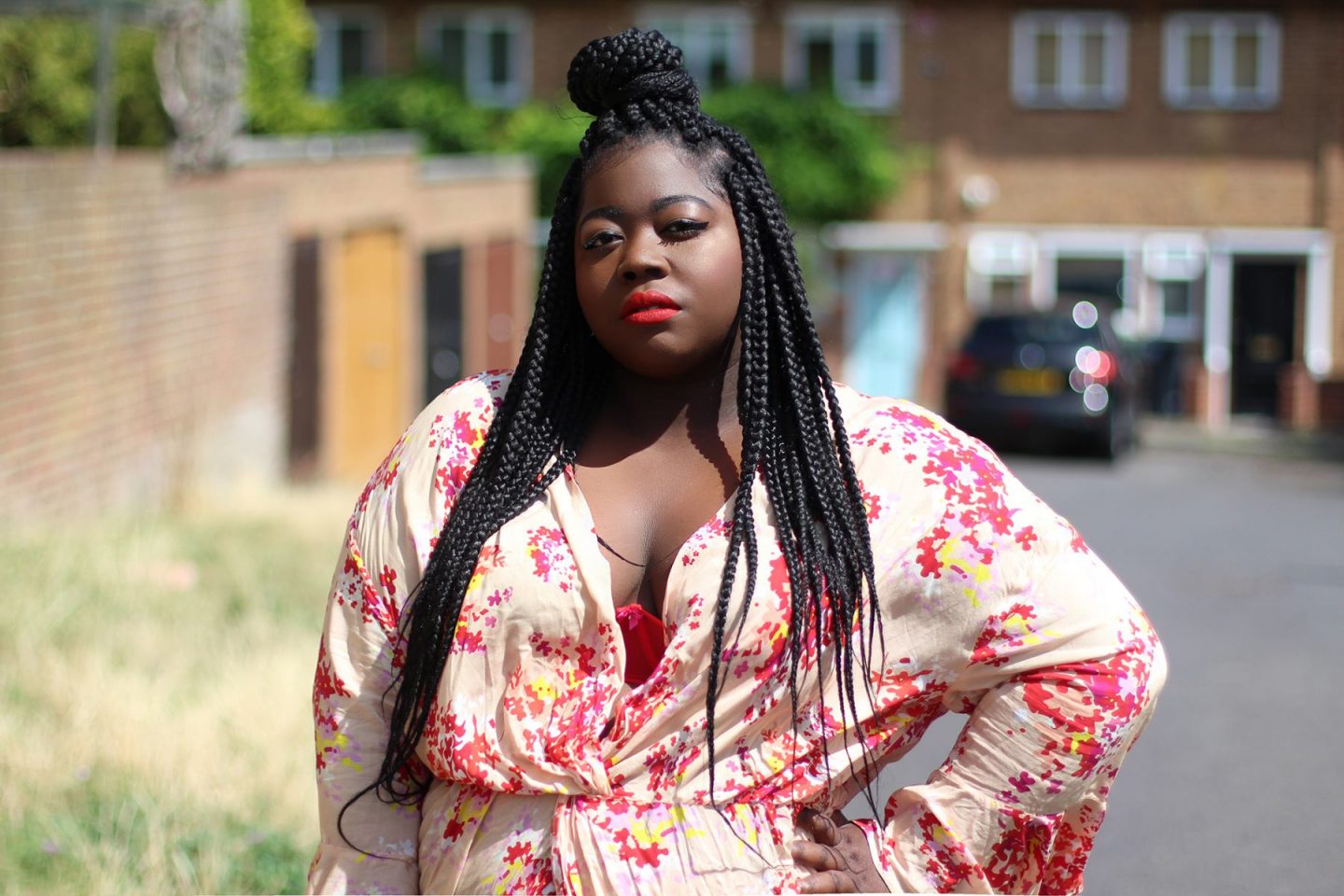 One thing I have had to make peace with over the last couple of months is that while I love myself, and am confident in my abilities and the fact that I know i’m a great person, I know that society (as a whole) doesn’t view me and my body as attractive. I know that myself and others will always find it difficult to date regardless of how amazing we may be as individuals and that’s something that, unfortunate as it sounds, is something I just have to make peace with. It’s not me being pessimistic, it’s just the reality of the situation.

So what’s the end game of this post? Nothing really – I just wanted to highlight that it’s hard out here for a G, and that in a perfect world, everyone would be judged on the content of their amazing characters as opposed to how they look, but alas.

All I know is, my black body is a temple — it is beautiful, independent and mine. It cannot and will not be fetishised. My black body was something I had to reclaim and learn to love for myself. I love my thick lips and thick hips. I love the way my skin glows in the sunlight, I love my curly (or currently, braided) hair, soft thighs, and rolls.

My black body is beautiful, wonderful, and mine (and if you wanna slide into a G’s DMs to declare your undying love for me, please do).

BECAUSE YOU'RE WORTH IT

Practicing Self Love On Valentine's Day*